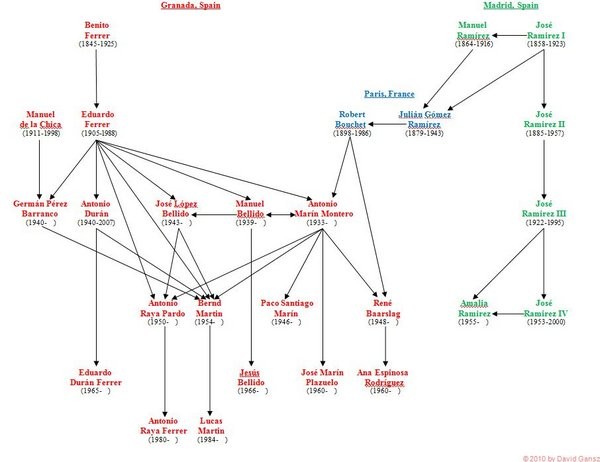 In an earlier thread the question of a “Granada School” of builders was raised, leading to heated discussion regarding whether the term holds realistically meaningful validity. Now that passions have subsided, and without wishing to take a side in the matter, I’d like to share my understanding of the term strictly as evidenced by a chronological overview of the historical record. Perhaps this background information will help others elucidate their positions.

Evidently the first coinage of the term “Granada School” in English may be attributed to a translation of words by Eusebio Rioja, who published the book Inventario de Guitarreros Granadinos, (1875-1975) in 1976. George Clinton and John Roberts (Editor and History Columnist of the English magazine “Guitar”, respectively), visited Granada in 1976 and Roberts, as a result, published an article entitled “The Guitar in Granada” in the February, 1977 issue (pages 9-11). Roberts quotes from it extensively (in his own translation) in his article, and specifically quotes Rioja’s phrase in the introduction, "la escuela guitarrera granadina", as “the Granada School of makers”. Roberts then goes on to cover Rioja’s list of Granada makers.

Ivor Mairants, the English jazz guitarist and classical enthusiast turned guitar dealer (who was importing and selling guitars by Antonio Marín Montero, Manuel Bellido, and Antonio Raya Pardo among others already), covered six “Guitarreros of Granada” in his 1980 book My Fifty Fretting Years (pages 356-357) without using the term, however.

Rioja published a second edition of his book, this one entitled Inventario de Guitarreros Granadinos, (1875-1983), in conjunction with the 11th Congresso Nacional de Actividades Flamencas in Granada in 1983. Mairants was in attendance, met Rioja, and returned to England to publish the two-part article “Granada: City of Guitar Makers” in the March/April and May/June issues of “Classical Guitar” magazine (pages 71-74 and 59-60, respectively). Like Roberts’ article seven years earlier, Mairants covers Rioja’s now extended list of Granada luthiers. While not using the term “Granada School”, Mairants opts instead to use “pupils of the House of Ferrer”, “the school of Ferrer”, and “the Ferrer school”.

The aforementioned George Clinton returned to Granada in 1988 for a week’s visit, thereafter writing a series of twelve articles entitled “Escuela Granadina de Luthiers” (The Granada School of Luthiers) in “Guitar International” magazine from September 1988 through 1989. Not merely parroting Rioja’s term, Clinton instead was referring to an actual organization called the Escuela. In his words, “The Escuela was formed in 1987—in truth to bureaucratize an already close association—and comprises twelve makers” (namely, Antonio Marín Montero, José Lopez Bellido, Juan Miguel Carmona, Rafael Moreno, Germán Pérez Barranco, Antonio Raya Pardo, José Marín Plazuelo, Manuel Diaz, Bernd Martin, René Baarslag, and Jonathan Hinves). In addition to his introductory article, essays in future issues were each devoted to one of the makers (save Manuel Diaz, who was unavailable). Each essay bore the main title, “Escuela Granadina de Luthiers”.

Clinton was the first to define the Escuela vis-à-vis the Madrid (i.e. Ramirez) “School” of builders. He states, “As a school, the present makers share several characteristics…”. He then goes on to list:

A year later, in 1990, Lisa Hurlong (aka “Lisa de Granada”) published her article on select Granada makers, after having purchased an Antonio Marín Montero while on a concert trip to Granada in 1979, and having reacquainted herself with Granada in 1984. The article, “Guitarra Granada Ole” appeared in the summer, 1990, issue of “Soundboard” magazine (pages 14-21), and covered Antonio Marín Montero, José Marín Plazuelo, René Baarslag, José Lopez Bellido, Jonathan Hinves, and Bernd Martin. (Later, in the winter, 1992, issue of “American Lutherie”, she covered Antonio Raya Pardo in a separate article). Nowhere in her writings, however, does Lisa de Granada use the term “Granada School”.

John Huber’s book, The Development of the Modern Guitar (Bold Strummer, 1991, and second edition, 1994), is careful to use the term “Granada School” in double quotes, as does Kenny Hill in his 2001 essay, “Visit to Legendary Granada” on his website.

In summary, then, it would appear that “Granada School” as a term in English has its origin in print in a translation of the 1976 writings of Eusebio Rioja. An actual Granada School was formalized in 1987, and George Clinton wrote extensively about it and its makers in English from 1988-1989. (Perhaps one of our Granada contributors might enlighten us as to the fate of the Escuela as an organized body of luthiers).

Aside from the formal organization which utilized the name, “Granada School” has, it seems, come to be associated with virtually any builder in Granada whose guitars exhibit most of the characteristics that Clinton enumerated in his 1988 article. In addition, it would seem that, as Mairants insinuated, luthiers of the “Granada School” can trace their lineage of teachers back to the House of Ferrer. Unlike the “Madrid School”, where few lineages spanned more than two generations save for the House of Ramirez, in Granada we find fathers teaching sons (e.g. Manuel and Jesus Bellido, Antonio Durán and Eduardo Durán Ferrer, Antonio Raya Pardo and Antonio Raya Ferrer, and Bernd and Lucas Martin), uncles teaching nephews (e.g. Benito and Eduardo Ferrer, Antonio Marín Montero and both Paco Santiago Marín and José Marín Plazuelo), brothers teaching brothers (e.g. Manuel and José Lopez Bellido), brothers-in-law teaching brothers-in-law (e.g. José Lopez Bellido and Antonio Raya Pardo), husbands teaching wives (e.g. René Baarslag and Ana Espinosa Rodriguez), etc. Hence familiarity is literally key, with the exception of expatriates, of course. Even then, for example, Antonio Marín Montero has referred to René Baarslag as being “like a son to me”.

P.S. The renowned historian, author, luthier, and guitar dealer Richard Brune, having read the above, has contacted me and graciously shared the following information: Brook Zern, author of a regularly appearing column on the Spanish tradition of lutherie in the publication "Flamenco Information Service Library Newsletter" in 1968, having finished a multi-part series on the Madrid school, indicated that his next month's installment would be on the "Granada school". So Richard, without having actually surveyed his vast archival collection of literature on the subject for verification, believes this to be the first appearance of the term in English. Interestingly, Richard notes that, in the actual article (No. 8, Vol 1, page 3...December, 1968), Zern states, "Granada has its own group of constructors (I'd hesitate to call it a School)". I am very grateful to Richard, an acknowledged expert in these matters, for freely sharing this information with us.